Chili peppers have happily entered our kitchens with their capsaicinoid content, since Cristoforo Colombo brought then back from Central America. Capsicum species however are labour-intensive and difficult to grow. They are also notoriously recalcitrant to biotechnological intervention. Tomatoes are much handier in comparison. The Capsicum and Solanum clades split at least 19 Mya ago but comparative genomics has revealed that tomatoes retain all the necessary genes for pungency. Why not to harness CRISPR power to turn tomatoes into capsaicinoid biofactories then?

The idea pops up in the journal Trends in Plant Science with an opinion article by  Agustin Zsögön and other researchers from Brazil. The task is challenging but not impossible. We would get an easier way of mass producing hot molecules for commercial purposes. Maybe we could also reinvent traditional dishes such as “arrabbiata sauce” or even launch new culinary inventions along the way. 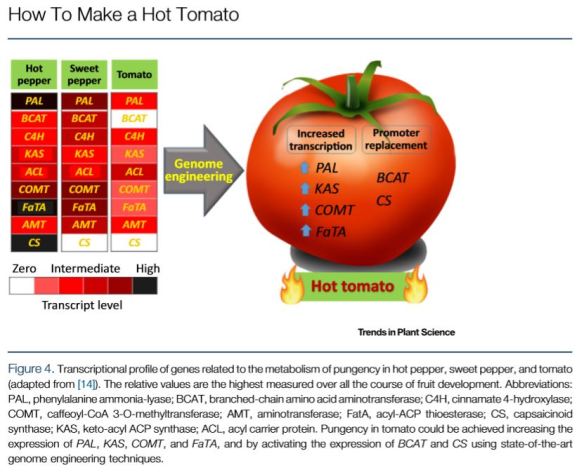