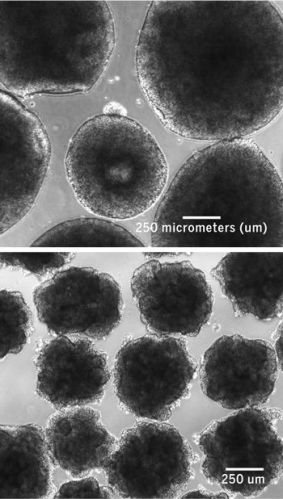 Taking a peek into the brain of a Neanderthal specimen would be a dream for whoever is interested in the evolution of human intelligence. To get an idea of the cognitive abilities of our closest relatives, so far, anthropologists and neuroscientists could only study the fossil and archaeological record, but a new exciting frontier is opening up where paleogenetics meets organoids and CRISPR technologies. By combining these approaches, two labs are independently developing mini-brains from human pluripotent stem cells edited to carry Neanderthal mutations. Alysson Muotri did it at UC San Diego, as Jon Cohen reported in Science last week. Svante Pääbo is doing it at the Max Planck Institute in Leipzig, as revealed by The Guardian in May. Forget George Church’s adventurous thoughts on cloning Neanderthals. The purpose here is to answer one of the most captivating questions ever asked: did the mind of these ancient men and women, who interbred with our sapiens ancestors before going extinct, work differently from ours? Last but not least, with respect to the ethics of experimenting with mini-brains, don’t miss the perspective published in Nature.