Physalis fruits look like golden marbles, larger than a blueberry, smaller than a grape. Carl Zimmer tried one, liked the rich pineapple-orange taste and wrote about their crispy future in his new book (“She Has Her Mother’s Laugh: The Powers, Perversions, and Potential of Heredity”). Ground-cherries, as they are called, belong to the same family as tomatoes but are an impossible challenge for traditional breeding because they have four copies of each chromosome rather than two. 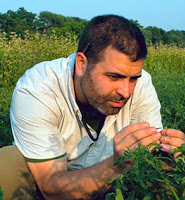 CRISPR, however, can easily fix multiple-copy genes at once. Zachary Lippman is editing these wild plants in his lab at Cold Spring Harbor and has already succeeded in increasing the number of locules in the fruits, a key step in tomato domestication. Now he is going to test other edits to make ground-cherries easier to gather, for example by synchronizing ripening. If the traits work fine singularly, Lippman will fix them all at one shot in one plant. “I think this will be the next berry crop,” he says. Zimmer goes even further: “I thought Lippman was being too modest. He was trying to replay the Agricultural Revolution on fast-forward. Instead of thousand years, he might only need a single growing season”. Let’s wait and taste.