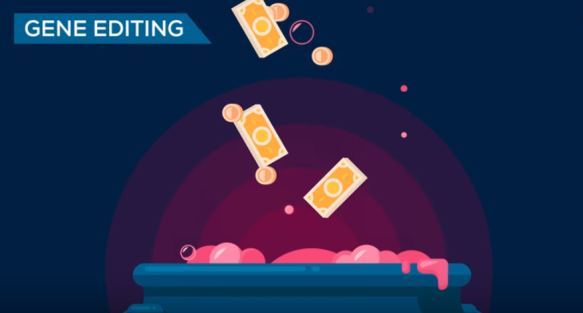 Up and down, following the excitement for the latest scientific exploit or frustration for disappointing results. CRISPR is young but already knows how volatile is the market. “Preprint wipes millions off CRISPR companies’ stocks,” cries the March issue of Nature Biotechnology. CRISPR Therapeutics, Intellia Therapeutics and Editas Medicine indeed lost a combined $500 million in a day in the aftermath of a draft-paper published by bioRxiv. “CRISPR stocks add over $530 million in market cap,” exulted BioCentury on January 30th, just after a pair of Nature Biotechnology papers on tricks to make the technology more precise. “CRISPR stocks sank on news that the gene editing tool can veer off target,” warned Stat at the end of May, discussing a controversial study published in Nature Methods. Investing in biotech is not a child’s play of course. “How will the last biotech bubble burst? We asked some experts,” is a title from this week Stat website. The Nasdaq Biotech Index has more than doubled since 2013 and will deflate sooner or later, even if nothing like the end of the genomics bubble looms on the horizon. Markets get excited and slow down, and nobody says it was easy, as in that Coldplay song. Anyway, blaming bioRxive would be probably unfair. After all, the worst Frankenfood scares were fuelled by peer-reviewed (and yet misleading) studies published by traditional academic journals such as The Lancet. And in the brief history of CRISPR, so far, we may argue that bioRxiv has done more good than bad.