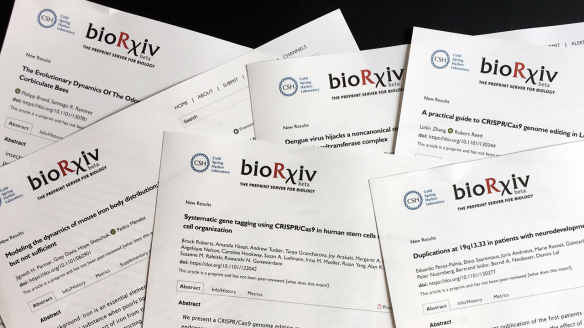 It was August 2 when Nature published the latest stunning study, introducing to the world the first human embryos edited in the US by Shoukhrat Mitalipov. Not even a month had passed, and on August 28, those results have been challenged on a much younger and quick medium: the bioRxiv pre-print website. I felt like a déjà vu happening. It reminded me of the Nature Methods study questioning CRISPR’s precision in June. Within three weeks bioRxiv has already challenged the controversial data about off-target mutations by posting two critical analyses which soon became three. In short, this server is rewriting a part of CRISPR’s science and it is becoming an emergency tool for correcting mistakes that, inevitably, sometimes tarnish the most respected peer-reviewed publications. How does it work?

BiorXiv is a digital repository for life sciences papers that have not yet been peer-reviewed, inspired by arXiv, the well-established archive for draft papers focused on physics. The only controls guaranteed are a fast screening and an anti-plagiarism check. Real quality assessments come downstream, when pre-prints posted online are publicly commented on by other scientists, and when they are submitted for publication in peer-reviewed journals. But science runs fast, and bioRxiv is increasingly used by leading researchers, such as George Church, to quickly disseminate their reasonings as in the recent CRISPR cases. The service is free for both authors and readers. It was founded in 2013 by Cold Spring Harbor Laboratory and it is now posting a thousand articles per month. Future growth will be supported by a cash donation of undisclosed amount, announced in April 2017 by the Chan Zuckerberg Initiative (CZI), a $ 3 billion project launched by the Facebook co-founder and his wife, pediatrician Priscilla Chan. One could legitimately fear that the flourishing of pre-print archives would feed bad science production. Paradoxically, for CRISPR at least, the opposite may be happening. BioRxiv may become something like a watchdog of classic publications.