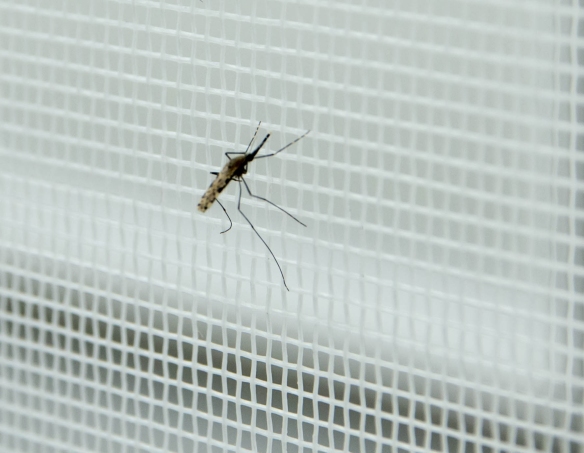 Mosquito nets are not enough, vaccines are late to come, land reclamation in Africa is a challenge. But there is a new hope for defeating malaria, coming directly from the most advanced CRISPR frontier. The trick is a kind of genetic chain reaction fuelled by genetic elements called “gene drives”. Researchers are experimenting their power with the aim of crashing the number of mosquitoes responsible for Plasmodium transmission, by spreading genes that are bad for Anopheles gambiae. A gene behaving in Mendelian way has a 50% chance of being passed on from parent to offspring, but it can virtually reach 100% with a little help from a drive. Thus a gene designed to damage a harmful species can propagate within a few generations with a domino effect, until the population collapses. One of the founders of this futuristic strategy is an Italian molecular parasitologist: Andrea Crisanti, of the London Imperial College. We asked him to explain times and ways, strengths and risks of this approach.

The CRISPR patent landscape is quite complex, what about intellectual property rights on gene drives?
Gene drives were born from a collaboration involving the London Imperial College and the University of Washington. In 2011 we coauthored a paper published in Nature, showing the basic concepts. We decided not to file a patent to make gene drives accessible to everyone. The same group is the central nucleus of the Target Malaria project funded by the Bill & Melinda Gates Foundation.

CRISPR came in 2012. How did it work before?
Experiments to get rid of undesirable insects by sterilizing males through mutagenesis are decades old; for example, this strategy works fine against the fruit fly Ceratitis capitata in Israel, Turkey, and California. Unfortunately it’s expensive, and logistics is challenging. Therefore we thought a nuclease, that is an enzyme capable of cleaving DNA, could help us spread selected genes and make the population collapse. If the cell repair mechanisms can be induced to correct the cut by copying from a template including the gene we want to propagate, problem solved. However nucleases used before CRISPR (such as HEG) were difficult to program. Re-directing their activity towards the target genes was a three-year work, but with CRISPR it takes just a couple of months. It’s as if we were busy screwing by hand and then someone said: “Try this screwdriver.” Not only it has shortened the time, but the number of genes that can be targeted has increased.
The idea has been proven in the lab, but will it also work outdoors, in nature?
“Target malaria” involves specialists from different disciplines, i.e. epidemiologists, ecologists, social scientists, law and ethics experts. There are about 100 people by now. Over the last five years, we have been working to identify places for field releases, to find local resources, to engage native people. It is a massive effort based on principles of openness and safety, in line with the Gates Foundation philosophy.
Why is Italy so committed to this front?
The country has an important tradition in malariology; I consider myself heir to the school of Alberto Coluzzi. The fight against malaria lasted over 80 years in Italy, and when I was born the disease was still there. People still retain memories of those pains; supporting labs working to defeat malaria elsewhere is a gesture of solidarity.
Genetic modifications are mainly made in London, what does it happen to mosquitoes then?
They travel to Italy as eggs on paper impregnated with water. Even if a packet gets lost they would not survive, they can only develop if opened in right conditions. Our procedures have been validated by an international inspection team and are in line with WHO recommendations. In the new Terni lab, mosquitoes are used in functionality, safety and scalability experiments. We want to see if genetic modifications are passed on, if they mutate. We work on huge numbers, in environments mimicking tropical conditions. The next move, after these climatic chambers, will be to biospheres in Burkina Faso, Uganda, Kenya and maybe Mali.
What about the schedule?
Confined experiments with the first mosquito lines should be completed in a couple of years. I think it will take longer to get to the field stage than to eradicate malaria because we don’t want shortcuts. GM mosquitoes have already been released outdoor by the British company Oxitec, but their genetic modification does not survive in the environment because carriers are sterile. Conversely, our mosquitoes have to spread the modification to make the population collapse.
Which genes do you target?
A strategy is to destroy X chromosome during spermatogenesis, so that only males are born. Males do not transmit malaria, and the imbalance gender will cause the population to crash. Alternatively, we destroy a gene that is involved in female fertility but ineffective in males, they transmit it to female offsprings which become all sterile.
Why don’t you make mosquitoes resistant to Plasmodium instead?
Because once released, we would have no control over the evolution of a genetic system that is self-perpetuating. Conversely, blocking females fertility can result in the following scenarios: the approach works or does not work. In the first case, mosquitos are eliminated because of its success. In the second one, the modification is lost. Mosquitoes can be reintroduced later if desired, when malaria has been eliminated and can no longer be transmitted.
So mosquitoes extinction is not the final goal?
Think of Sardinia as a paradigmatic example. After World War Two the island was chosen as an experimental model by the Rockefeller Foundation and DDT was widely sprayed for 4 or 5 years. Of the four malarial species there, two have disappeared, and the other two have been minimized. Malaria vanished in this way, but mosquitoes came back as soon as the use of DDT decreased. To be clear, our goal is not to completely remove mosquitoes but to suppress their number for the time needed to treat all malaria cases and block the parasite transmission. This is what will probably happen: the genetic modification will quickly disseminate in few years, but some mosquitoes might remain in small ecological sanctuaries and then re-emerge. We prefer this approach that is called “suppression” to the alternative of “replacement” both for ethical and scientific reasons.
Is it a self-sufficient strategy or should it be complemented with classical anti-malaria tools?
Our project aims to develop mosquitoes that are self-sufficient as a tool against malaria, but this strategy can synergize with future vaccines, mosquito nets, pharmacological treatments, and environmental remediation.
What are the advantages of gene drives?

First of all, everyone will benefit, because the strategy works without distinction of culture, social class or age. Furthermore, it is self-sustainable: after releasing the mosquitoes, there is no need for large resources for prolonged periods of time, neither complex logistics nor multi-decade political will are requested. Technology can give unexpected good results, think of mobile phones in Africa. While landline phones penetration is low in Africa, mobiles have overcome barriers, with positive effects for communication and economic development but also, surprisingly, for literacy, because writing messages costs less than talking.
Shouldn’t people be afraid of genetic chain reactions?
This is a catchy expression but calling to mind atomic fears would be misleading. Indeed a nuclear reaction is fast and efficient, while genetics is a delicate process. Researchers have a duty to show that everything has been done to identify and mitigate risks. Those who think that humans shouldn’t tinker with genomes and species will always object to gene drives. But controversies can be solved democratically, considering the interests of patients and society as a whole.
What can go wrong?
To minimize the risk of unanticipated effects we are proceeding step by step, with experts studying the technology from a range of perspectives. We are confident that high fidelity CRISPR variants may reduce off-target mutations. Another potential problem is the onset of resistance to the drive, stopping the genetic chain reaction, but we think we can overcome this hurdle by targeting multiples sites as we do when combining multiple antibiotics to cope with antibiotic resistance. We are also working on technologies to neutralize the drive if needed.
Somebody is worried about gene drives falling into the wrong hands, is that a real threat?
I think such “dual use” concerns are exaggerated: CRISPR may be easy to use but the gene drives technology is very complex, only a handful labs can do it. At the end of the day, the biggest risk is not taking any risk and failing to adopt the technology. Malaria kills over 400,000 people a year, leading to underdevelopment and environmental mismanagement. It is a heavy load imposed by poverty and pushing into poverty.
Will the technology be donated to African countries as soon as it’s ready?
A donation would imply an unequal relationship. Rather, we want to involve these countries in the technology development. That is why we are investing in capacity building, technology transfer, and training of African researchers, and these efforts will increase in the incoming months.