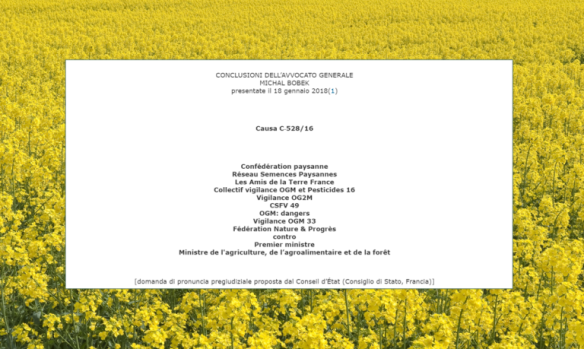 Agbiotech supporters and opponents have been waiting for months for the opinion of the Advocate General of the European Court of Justice, hoping that it would settle the fateful question: do edited plants follow the same legislation as GMOs? The answer, however, does not appear to be conclusive and has been variously interpreted. Nature, The Scientist, and The Guardian are cautiously optimistic, but this Euractiv article is even more interesting. Uncertainty is the prevailing mood in this field.

The Advocate General advice, and the forthcoming Court final judgment due in May 2018, address a narrow question about classic mutagenesis and it should not be taken for granted that this litigation will resolve the question whether New Breeding Technologies fall under GM restrictive rules. Furthermore, the issue is so complicated that any small word can have large effects. According to the Advocate General, for example, GM regulations may not apply to plants modified without using “recombinant nucleic acid molecules”. Obviously, CRISPR may avoid the insertion of foreign genetic material: the Cas9 enzyme cuts the target gene, and the resulting change is comparable to a spontaneous mutation. But you still need an RNA molecule guiding Cas9 to the right point in the genome. This guide RNA may be considered recombinant as it consists of the fusion of two RNAs. Let’s hope that the final wording will mention “recombinant DNA” rather than “recombinant nucleic acid molecules.”

1 thought on “CRISPR at the EU Court”