Super cool. The best film I’ve seen in years. I’m speechless. Over 3,000 retweets and dozens of ecstatic comments, this is how Twitter has reacted to the first real-time video featuring CRISPR, posted by Hiroshi Nishimasu of the University of Tokyo. It is not an animation clip, and it truly shows the Cas9-RNA complex paparazzed while doing its molecular job.

The Cas9 enzyme appears as a golden globe tied to a rope of DNA, standing out from the dark background. Let’s look at the magenta arrow: it pinpoints the enzymatic domain adopting an active conformation and cutting the target sequence at the right point. The blue arrow indicates the DNA being released a few seconds after the cleavage. The video ends here, but you know what to expect next inside a cell undergoing gene editing: natural repairing mechanisms come to the rescue, fixing the broken ends and introducing the desired mutations.
Everything goes as supposed, but seeing is more than believing. It conveys the sense of wonder of first-time sightings and awe for the ability of science to guess the details of invisible things and then to make them visible. This small (extra)ordinary scientific miracle was made possible by atomic-force microscopy, where a tiny mechanical probe feels the shape of macromolecules such as Cas9, enabling real-space and real-time observations. Don’t miss the paper published by Nishimasu and colleagues in Nature Communications if eager to learn more. 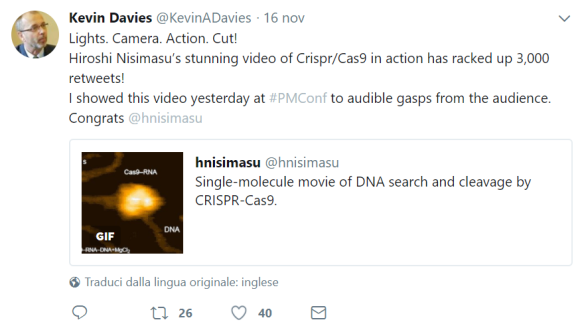