Golden Rice may be the best agricultural product from the biotech era before CRISPR. Unfortunately it’s caught in the GMOs redtape, and authorizations for commercial growing are still missing 17 years after its invention. This rice engineered to biosynthesize β-carotene could save lives and improve the health of people struggling with vitamin A deficiency in several regions of the world. If policymakers and consumers will give a warmer response to genome editing, in comparison with classic genetic engineering, could CRISPR solve the impasse by allowing the development of a new non-GM Golden Rice? We asked its inventors, Ingo Potrykus and Peter Beyer. 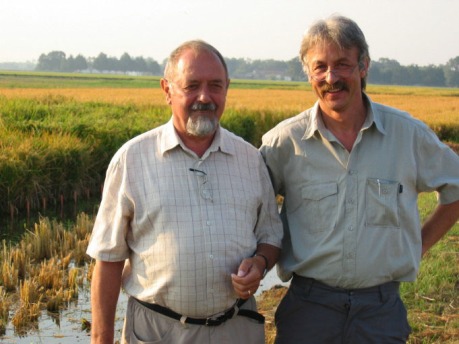 Beyer: CRISPR may perhaps represent an easier way in the current regulatory environment, provided the decision would be taken, finally, to regulate products instead than their making processes. This can’t be taken for granted, and CRISPR may encounter the same bureaucratic difficulties as in traditional GM.

Potrykus: In my opinion claiming that CRISPR is not a gene technology is a fake argument. It is indeed highly sophisticated genetic engineering. The fact that you cannot demonstrate at the end that there is foreign DNA is a rather legalistic argument.

Let’s discuss science. The molecular machinery to synthetize β-carotene is fully active in leaves but not in grain. Is it possible to switch it on in the edible parts of the plant by editing the rice genome?

Potrykus: I don’t think that it would be easy or possible to produce Golden Rice with CRISPR technology. Golden Rice and other valuable transgenic crops will not be replaced by CRISPR, which is an interesting technology, but not unlimited in its possibilities.

Beyer: CRISPR relates to the introduction of mutations in the first line. That’s fine, but it mainly results in a “loss of function”. This  can be a good thing, but what we need in agriculture is rather “gain of function”, as in the case of Golden Rice and insect resistance, for instance. Given you can produce a “gain of function” with a mutation that knocks out/down a certain gene, this would need to be a negative regulator of a given trait. These might exist, but are mostly unknown.  To make this clear: you need a super-high level of molecular understanding to be able to produce a novel gain of function trait by  mutagenesis.  Furthermore, it is not really possible to produce Bt maize where crossing of the species barrier is required. However, it is  also possible to introduce a gene cassette through CRISPR. But this has some disadvantages, let alone the fact that these would be as transgenic as those produced in the old-fashion way.

I’ld like to suggest a thought experiment. Please imagine that you had CRISPR in the ‘80s when the Golden Rice idea was born, would you introduce a gene cassette by means of CRISPR or would you choose the old genetic engineering? Is deciding the exact location where to introduce your gene not so relevant in this case? Would you still choose a daffodil gene to make the rice produce β-carotene?

Beyer: Here´s the point. If you (or somebody else) could tell me which is the right position to intervene in the rice genome, I would certainly consider it. As you may know, the position of the cassette determines levels of expression. Moreover somebody should tell me what the “right” expression level should look like. In this light, the advantage of normal transgenic is that you have a wide choice where to select from, through phenotypic analysis (like breeders do), while the disadvantage being that you will have to clean out inappropriate integrations. Considering advantages and disadvantages of both methods of transgenic cassette integration I would still use Agrobacterium for integration. I would certainly not use a daffodil gene, as the molecular  basis of different PSY effectiveness is pretty much clear, in the meantime.